A dramatic interior connected by glass bridges and workshop spaces opening onto the void. 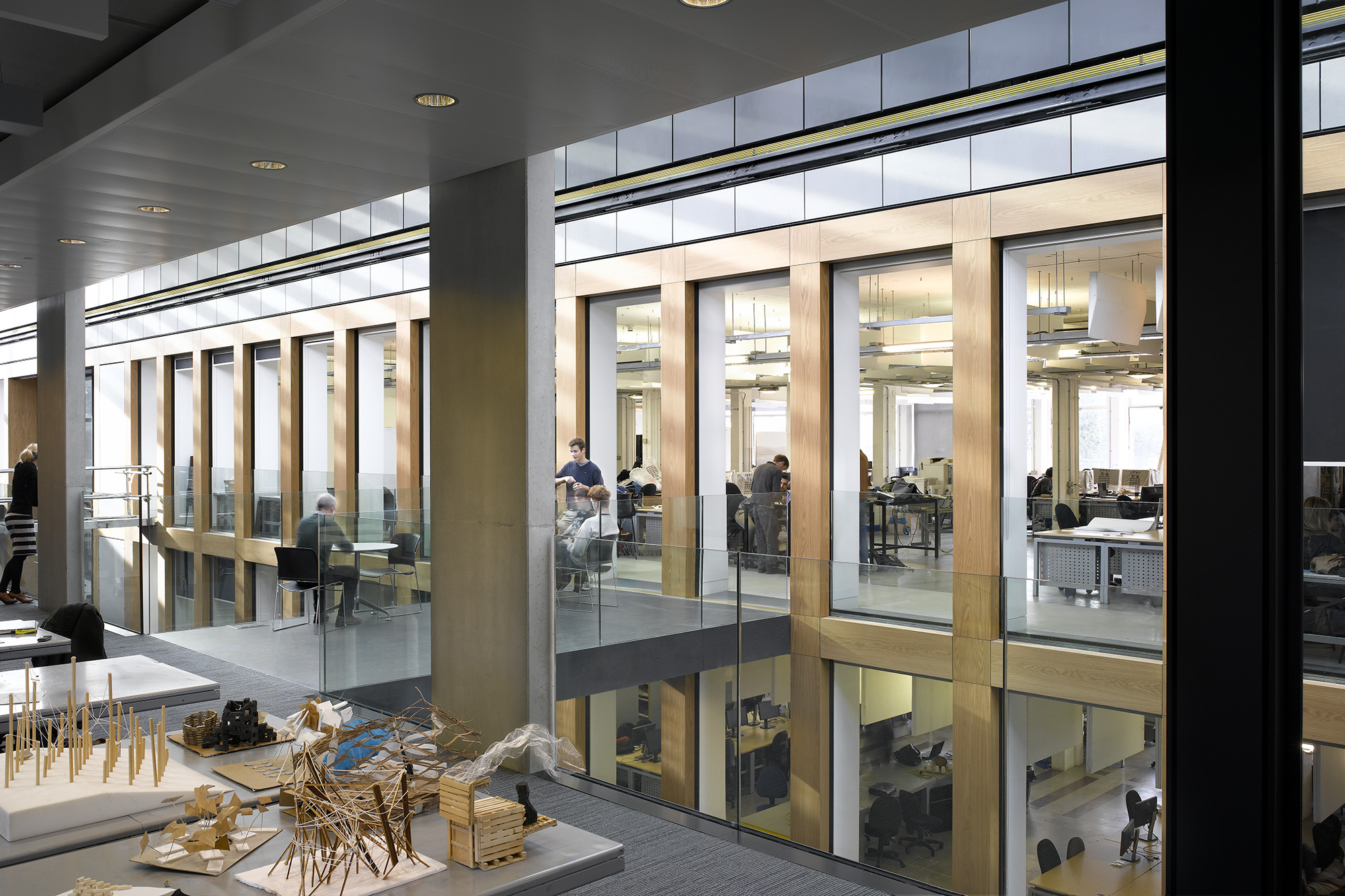 The Abercrombie Building forms the first phase of the wider masterplan for Oxford Brookes University, which includes the John Henry Brookes Building. The extended Abercrombie building rehouses and consolidates the Faculty of Technology, Design and Environment, which includes the School of Architecture. The extension runs to the south of Abercrombie and engages with the John Henry Brookes Building, helping to knit the new with the old. The new extension is linked to the existing building by means of glass bridges and shared meeting galleries, forming a dramatic interior with internal spaces opening onto the void.

The building is an example to students of best practice in terms of sustainability, construction, design and facilities. The void itself, with its high glass roof forms an environmental moderator, allowing in light, and air and framing views of areas not only on the same level, but to other parts of the school and outside to a courtyard.

Whilst the upper floors serve the faculty the ground floor is part of the wider University domain. The space incorporates a gallery space as well as cafe and experimental social learning space. 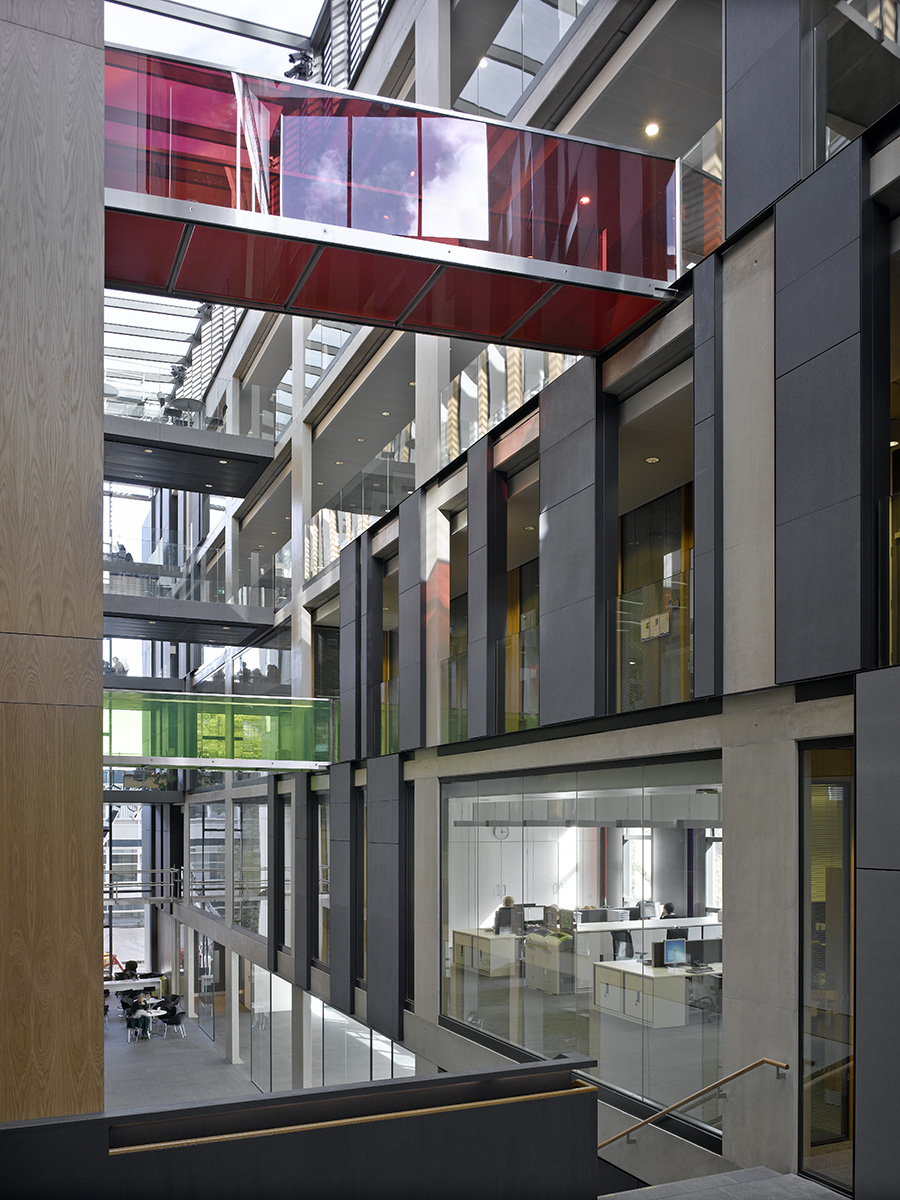 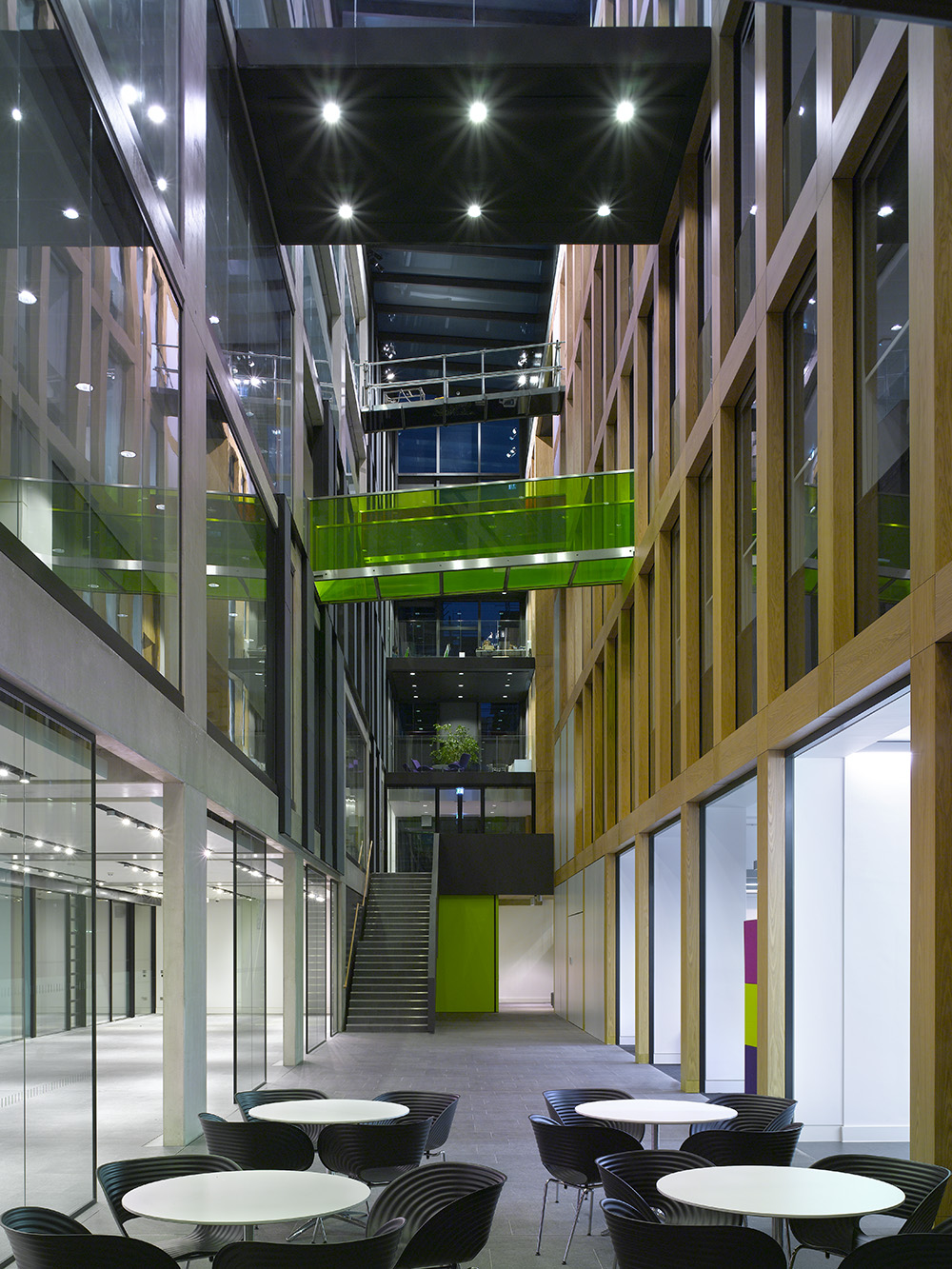 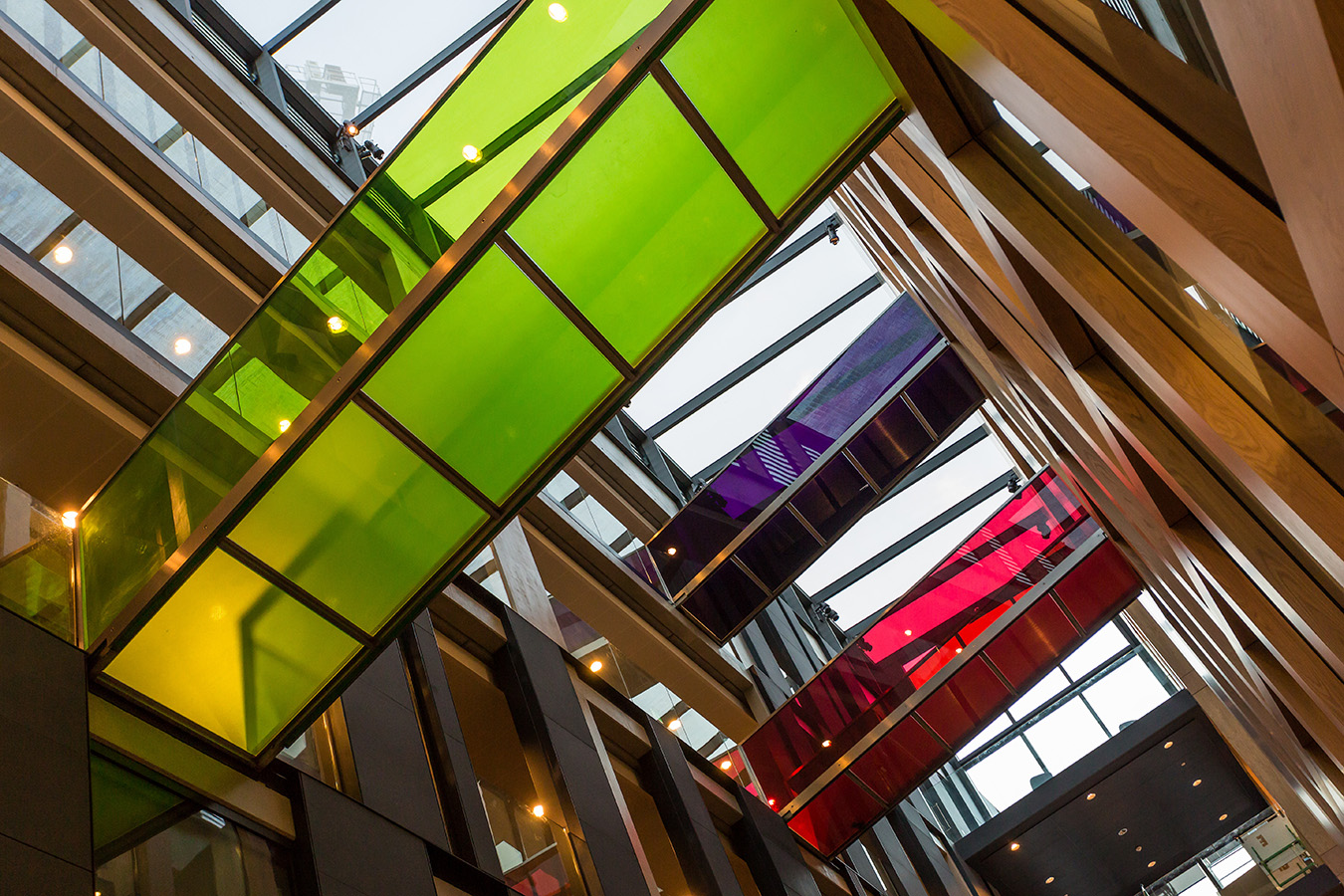 …this is absolutely exquisite…This is the beginning of a great modern cathedral of learning.University chancellor Shami Chakrabarti, director of campaign group Liberty.”

Despite having a well respected School of Art and School of Architecture the University lacked any space to exhibit the work of students. In fact there was a general lack of space that could be open to the public and in which the University could celebrate it’s achievements or hold public and private events.

It was therefore a key aspect of the design of the central atria space that it did not become a sterile environment. To help address this the space was fire engineered to allow floors to be opened up onto the space, both from the existing building and new extension.

In addition the atria was designed to become part of the main circulation route to the adjacent John Henry Brookes Building, the heart of the new campus. As well as a main entrance at level 1, from the public piazza. This location was then ideal for the incorporation of a gallery space with adjacent cafe.

So successful has the space been since its opening that the University have employed a curator to manage the rolling programme of exhibitions in the gallery. The space has also become a regular venue of events.

With the Abercrombie building being the home of the School of Architecture the whole atria space is occupied with installations during the annual end of year degree show. As well as joint exhibitions with the School of Art. 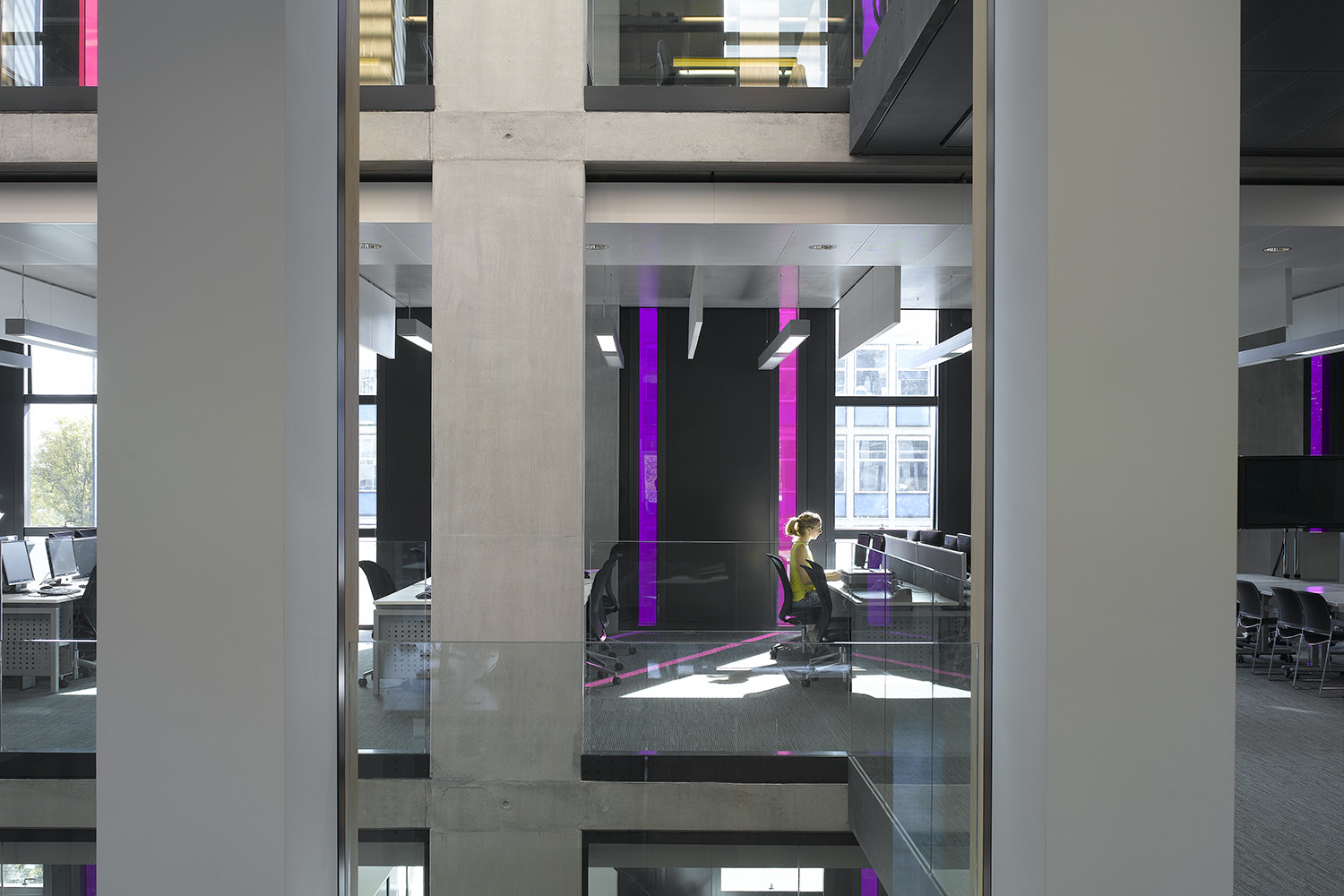