Design Engine has completed an extensive internal and external remodelling of the Goodwood Aerodrome Building. 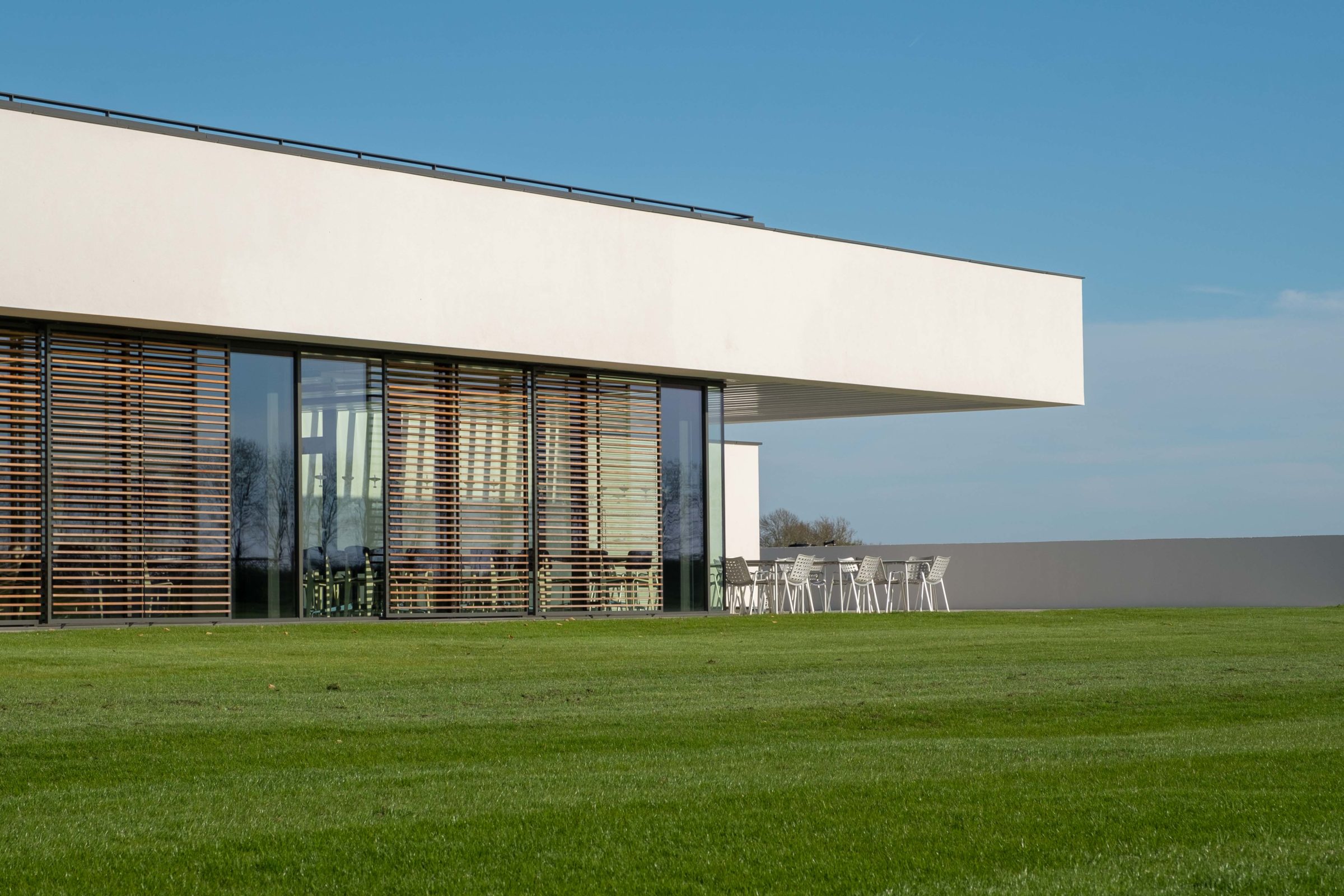 Design Engine has completed an extensive internal and external remodelling of the Goodwood Aerodrome Building after the practice was asked to carry out a technical and architectural assessment of the existing facility within the Goodwood Motor Circuit Estate. The aerodrome site, formally known as RAF Westhampnett, played an active role in WWII and is synonymous with ace fighter pilot Douglas Bader. His statue sat adjacent to the original building and has been given a place of prominence in the new scheme. 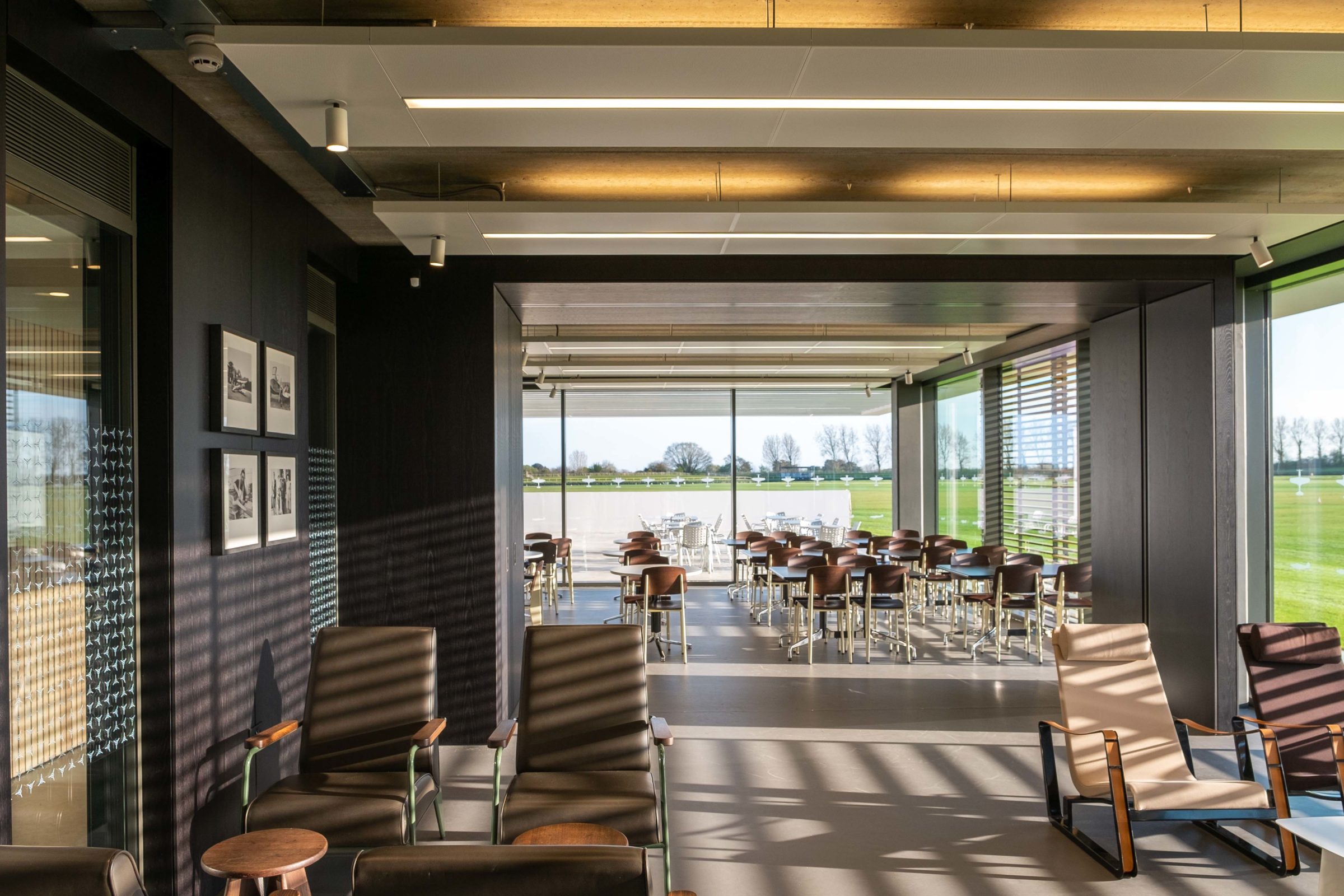 The 950m2 building footprint lies within the heart of the Goodwood motor racing track, with commanding views across an open grassland runway. The building consequently sits within a large expanse of land on three sides, which regularly receives the full force of the weather. 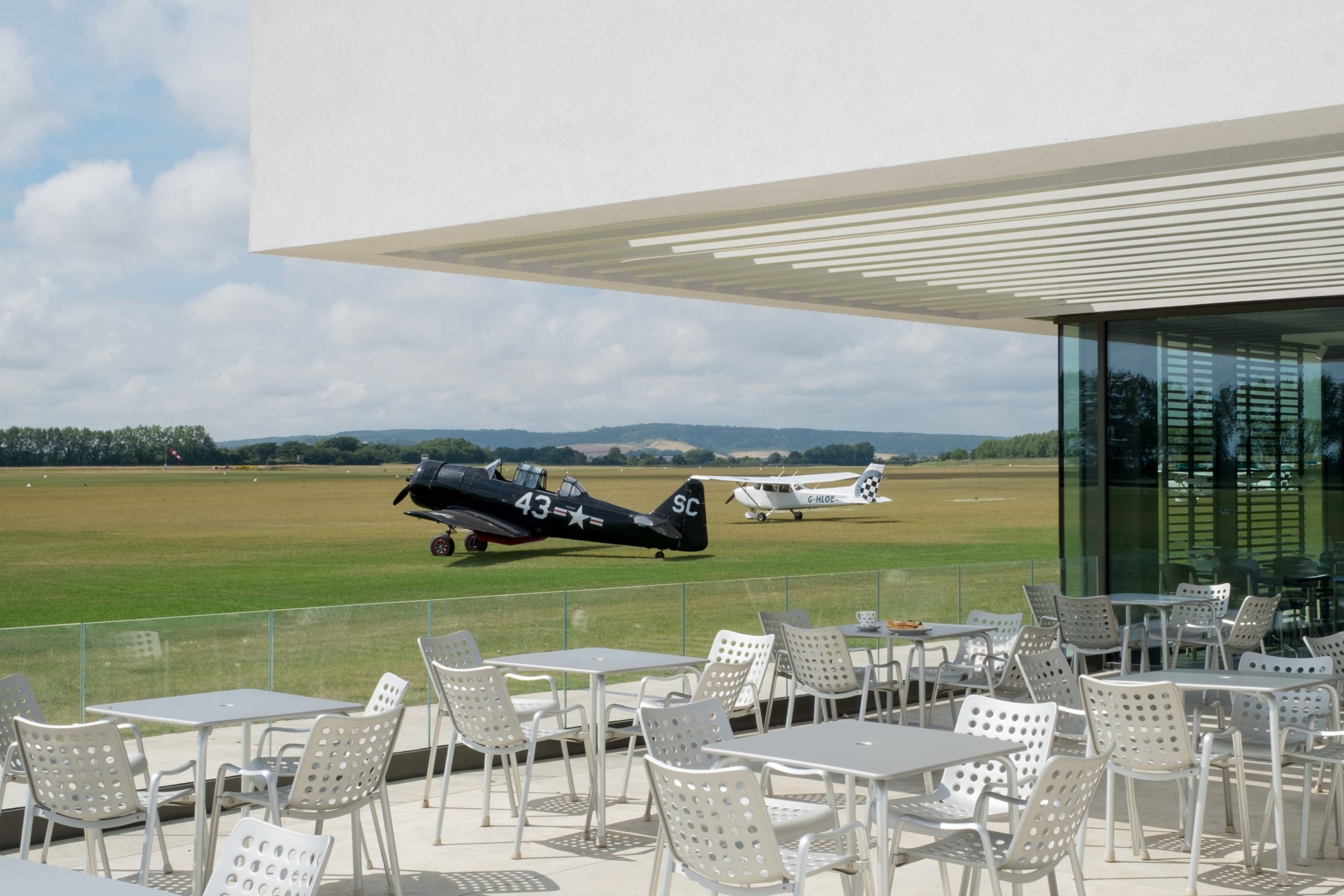 The original building was designed as a low linear pavilion with a large cantilevering first floor element forming an extensive viewing terrace over the airfield. The goal was to reinstate sympathetically the basic form with a new brief, whilst also addressing some of the shortcomings that existed within the building and addressing its awkward proportions; in particular how the building related to its immediate landscape. This was achieved by creating a clear differentiation between the top & bottom elements and extending low-level ‘arms‘ reaching out towards other parts of the site. These new volumes also help to screen or house subsidiary functions and encapsulate the building’s approach. 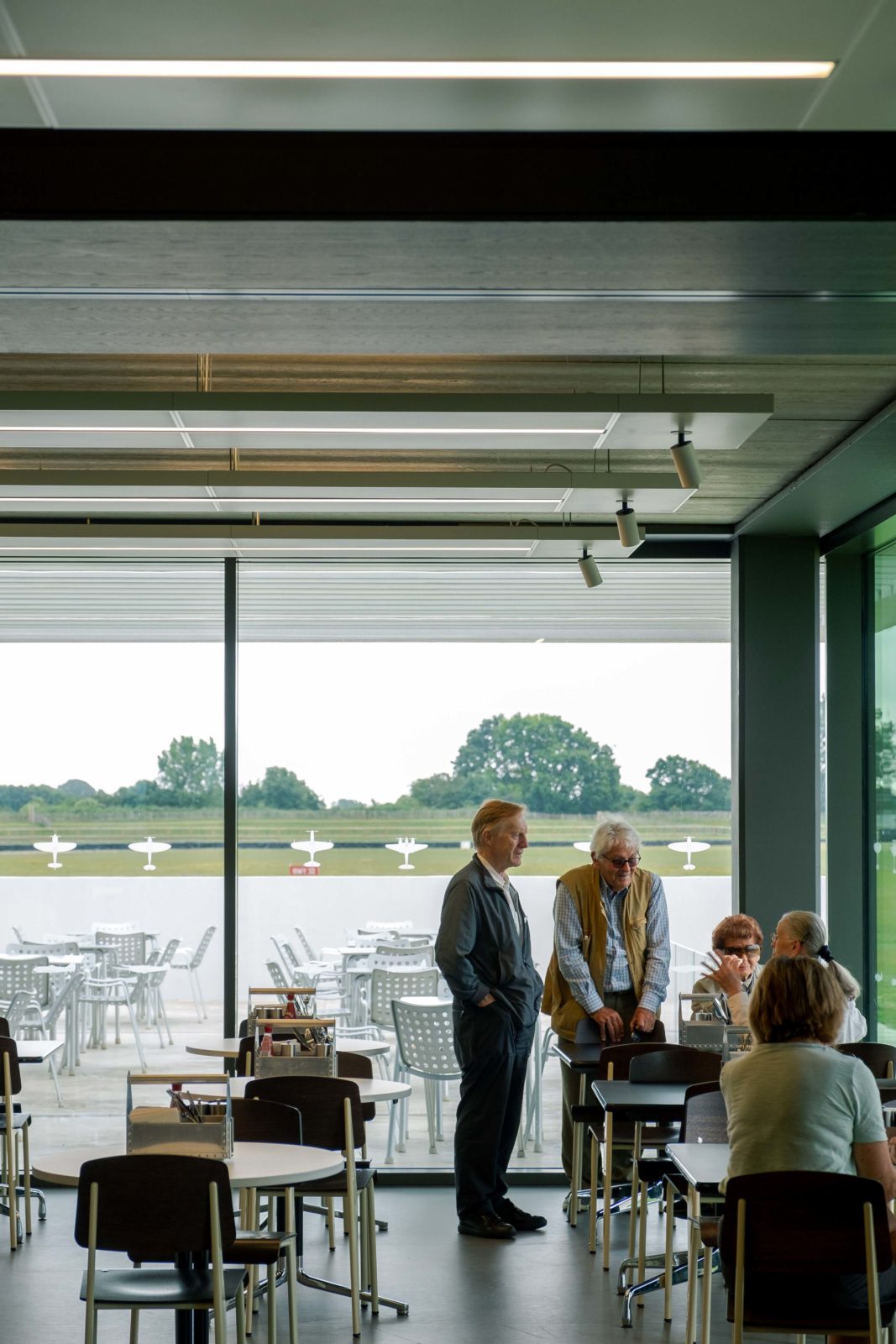 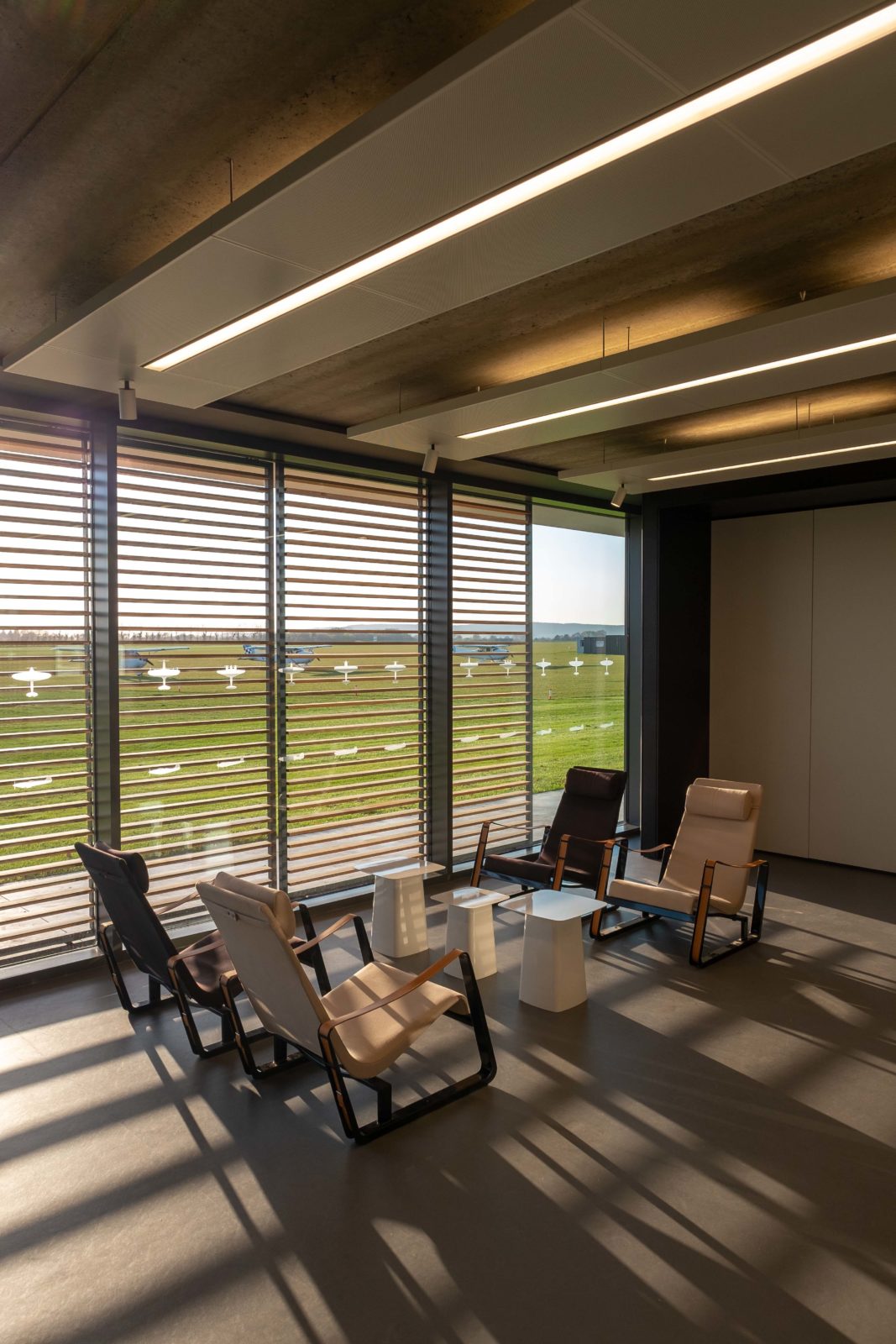 These moves allow the building to become a more legible and navigable series of external and internal spaces and not feel stand-alone. Relocating the Douglas Bader statue against the backdrop of the new building further roots the scheme within its wider context and history.

The internal configuration was also undertaken to achieve the required balance between flexibility and compartmentalisation. A compact internal area of 520m2 had to navigate opposing issues regarding acoustics, public and private while being a welcoming an open building for staff and public to enjoy. A limited but refined finishes palette was used to achieve a sharp and contemporary environment which worked with the existing spacial proportions. A series of linked internal ‘portals‘ aligning with each structural grid defines each space, creating niches for storage or movable walls.

Richard Jobson, Design Engine Founding Director, said: “This has been a fascinating project with an array of challenges akin to the restoration of an historic building but with the opportunity to correct and enhance some of the fundamental problems with the building’s previous incarnation. With the added bonus of every site visit watching the take off and landing of Spitfires!” 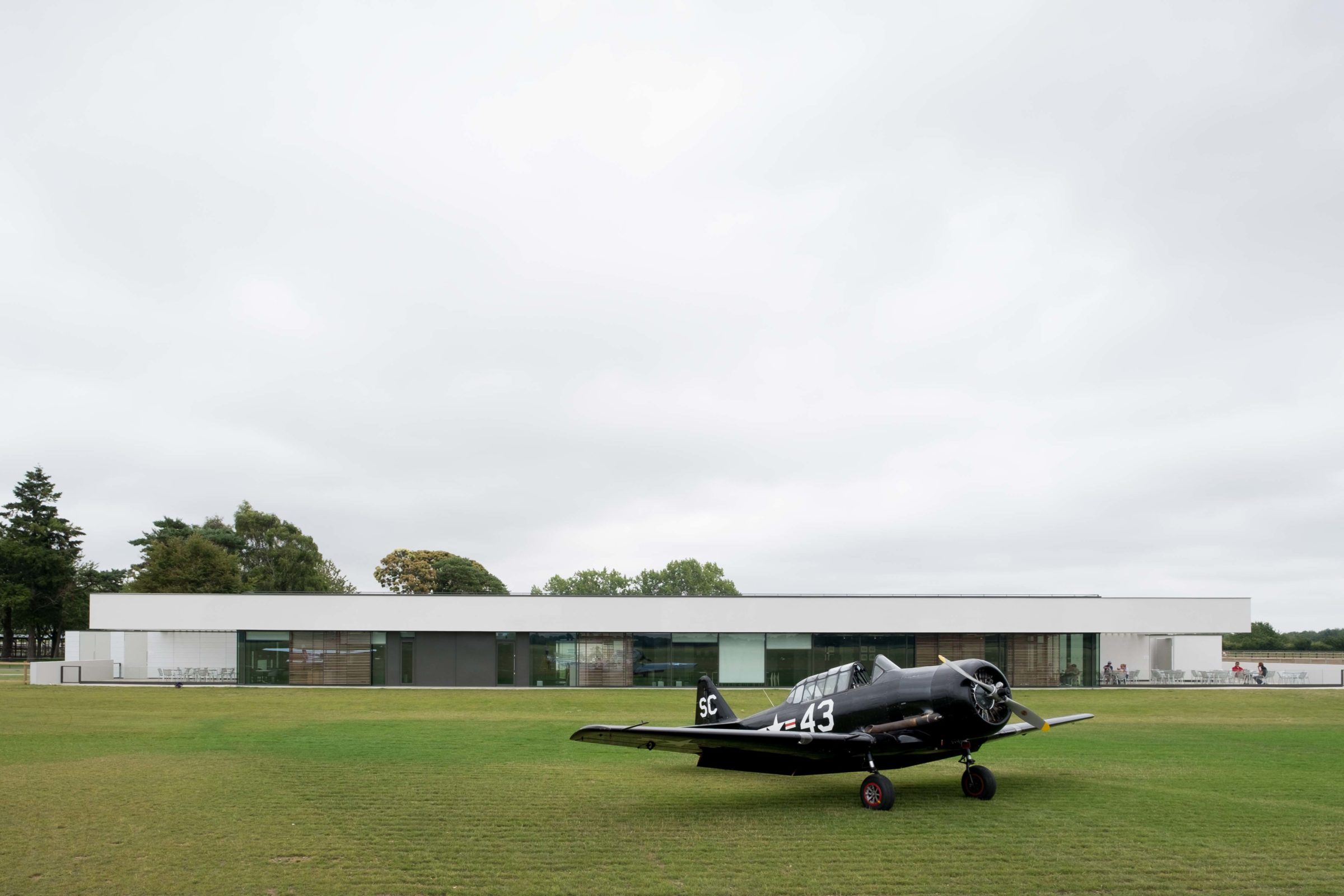