Canford is among the top co-educational independent schools in the country. It occupies a 250-acre site at Canford Magna in Dorset and educates 655 pupils, aged between 13 and 18, spread across seven boarding- and three day-houses.

The Assembly Hall’s seating capacity has increased from 570 to over 750 and the re-design has also created a fresh, modern multifunctional space to host an array of events. 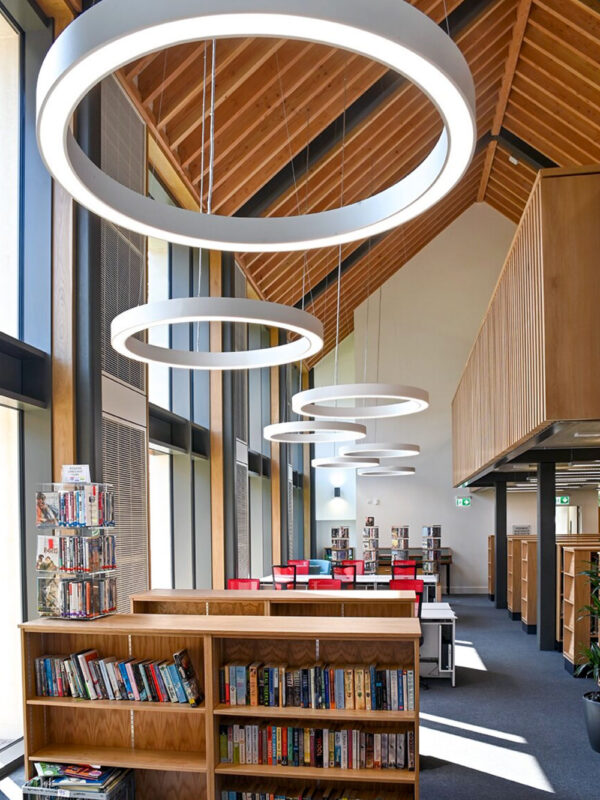 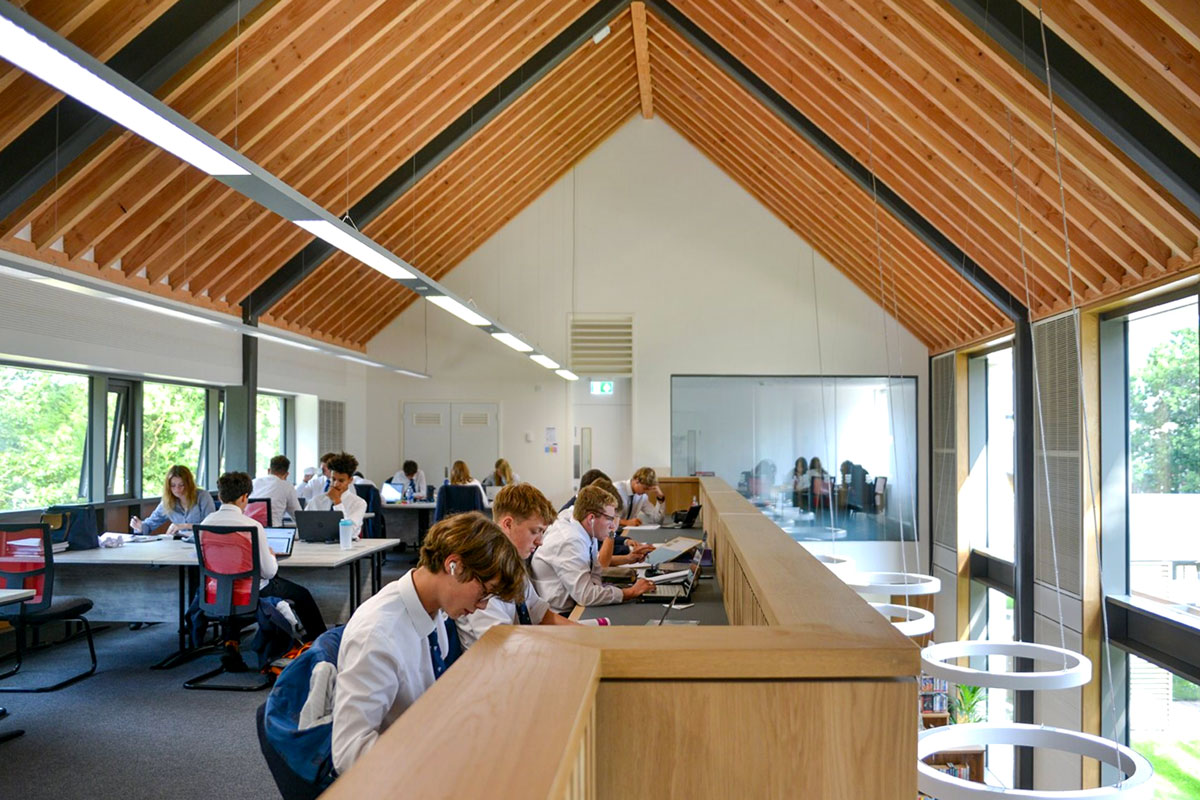 Following an invited design competition in 2017, we were commissioned to develop proposals for a modern purpose-built library with integrated IT provisions. This facility could no longer be accommodated within the school’s Grade 1 listed former manor house without a number of considerable interventions and so it was agreed that it would be located on the site of the existing Armoury, in a key location within the historic core of the campus.

A further component of the school’s brief was to increase the capacity of the 1930’s Assembly Hall in order to enable full-school assemblies to happen. This was to ensure this important building was retained in its current use as part of the school’s historic fabric.

The new library is the latest in a series of projects and offers a modern, spacious teaching and learning facility combined with the technology to take advantage of academic expertise across the globe. It has been fantastic seeing staff and pupils enjoying this brilliant new teaching and learning facility which will significantly enhance our high-quality educational offering. My thanks go to all those involved in making this ambitious building project a reality 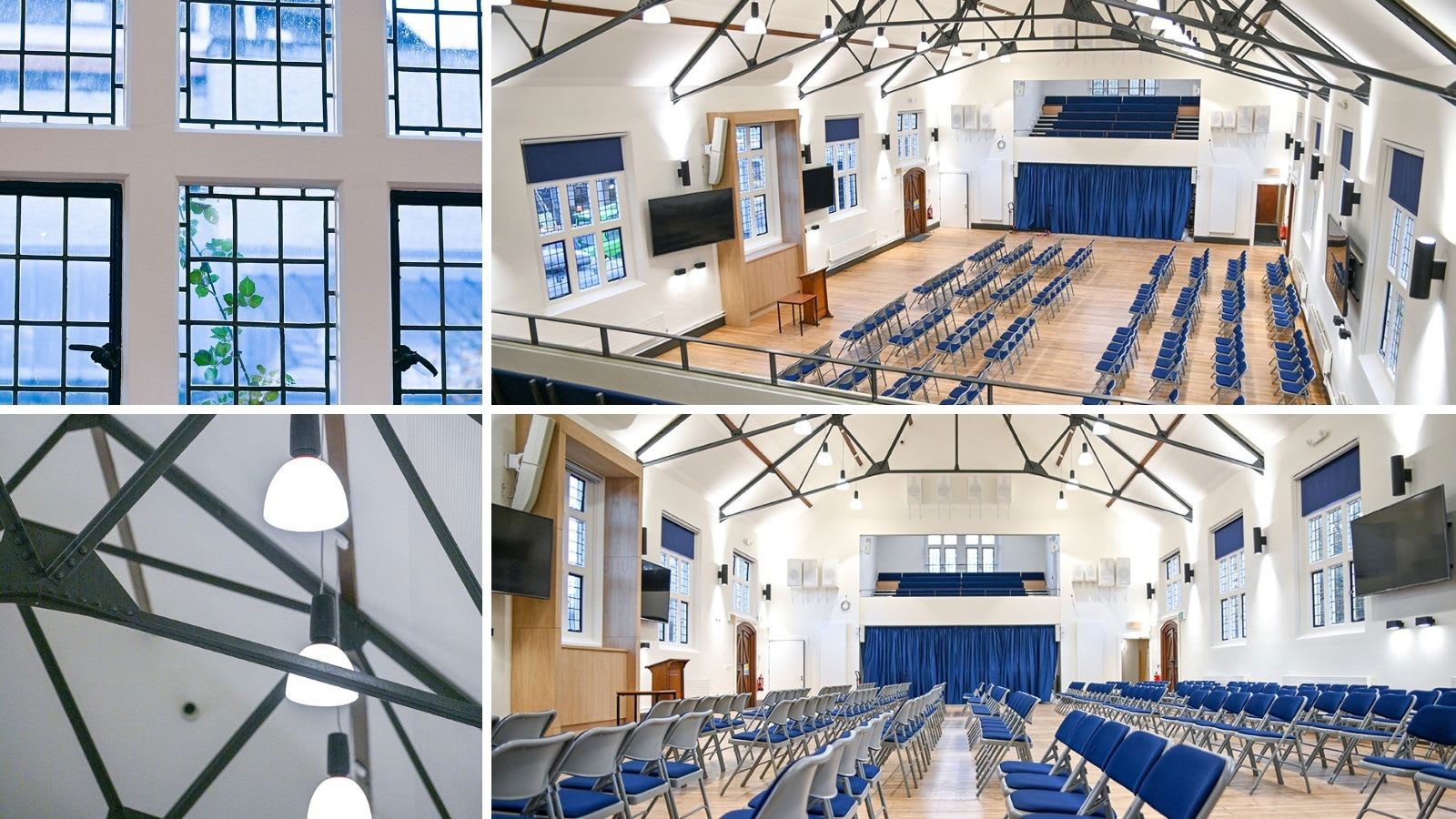 Really like the mezzanine – you are separate to be able to get on with work but still feel part of the library building.Canford School Student

The new building form has been sensitively developed to sit within the historic context; the massing reflects the geometry of the adjoining Hall, proportions and heights have been referenced in the south facade of the Library & Link building in a contemporary arrangement that echoes existing material colours, tones and textures.

The facade comprises horizontal timber brise-soleil and pre-cast fins which provide protection from solar gain whilst creating a sense of depth to the elevation. To reflect the visual rhythm of the protruding buttresses and match the eaves height, we have adopted the same grid as the existing Assembly Hall. This ensured we mirrored a similar bay width – enforcing a coherent architectural language between old and new.

The orientation of the new volume encloses external space between new and old buildings to create a new courtyard. A single-storey glazed link building provides a valuable break-out/refreshment space and connects the new Library to the existing Assembly Hall whilst creating a strong connection to the courtyard.

Internally the Library’s reception area, reading, study, IT space and book stack is contained in a double-height volume which incorporates a first floor amber-clad mezzanine to the northern two-thirds of the ground floor footprint. The airy interior volume is intended to provide good light levels and a relationship between the user’s study spaces and the entrance courtyard, whether they are at the ground floor or first floor mezzanine level. The architecture is honest, with exposed concrete ceilings, timber rafters and steel frame.

Remodelling of the Assembly Hall included the construction of two new fixed mezzanines with tiered seating, removal of the suspended ceiling grid system to reveal the original 1930’s steelwork and extensive redecoration works. Improvements to the acoustic and thermal quality of the space were made and new audio-visual facilities have been installed. 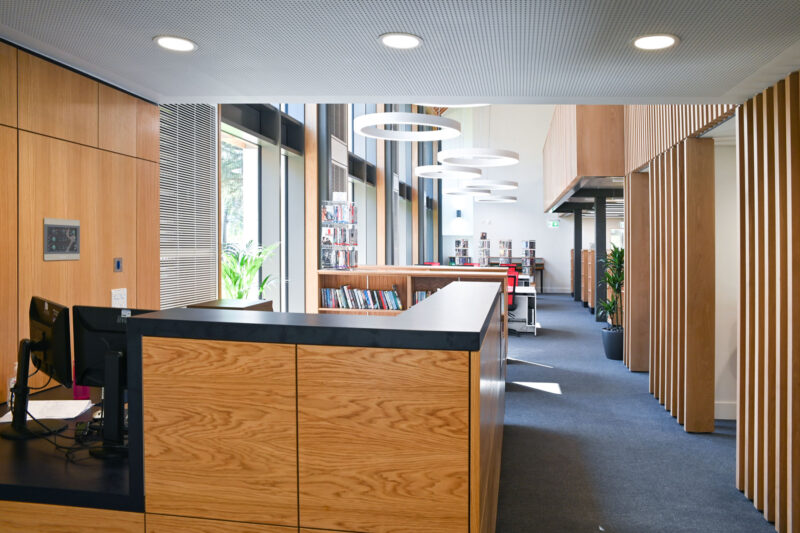 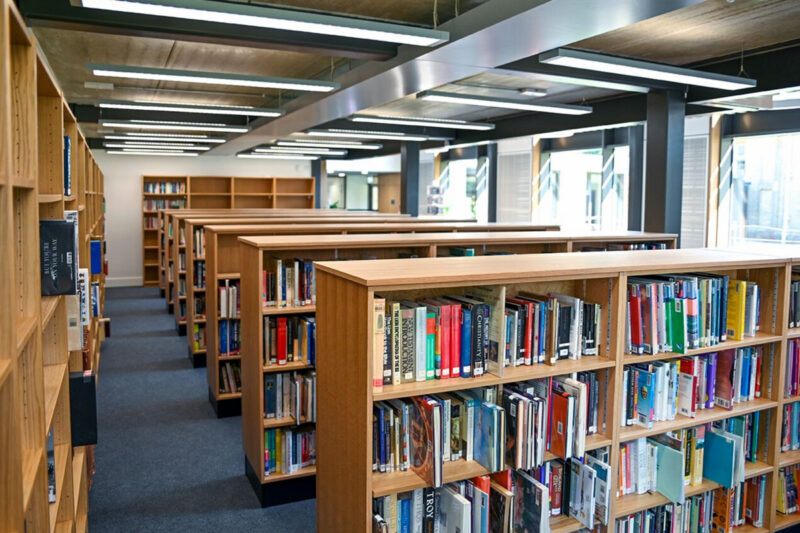 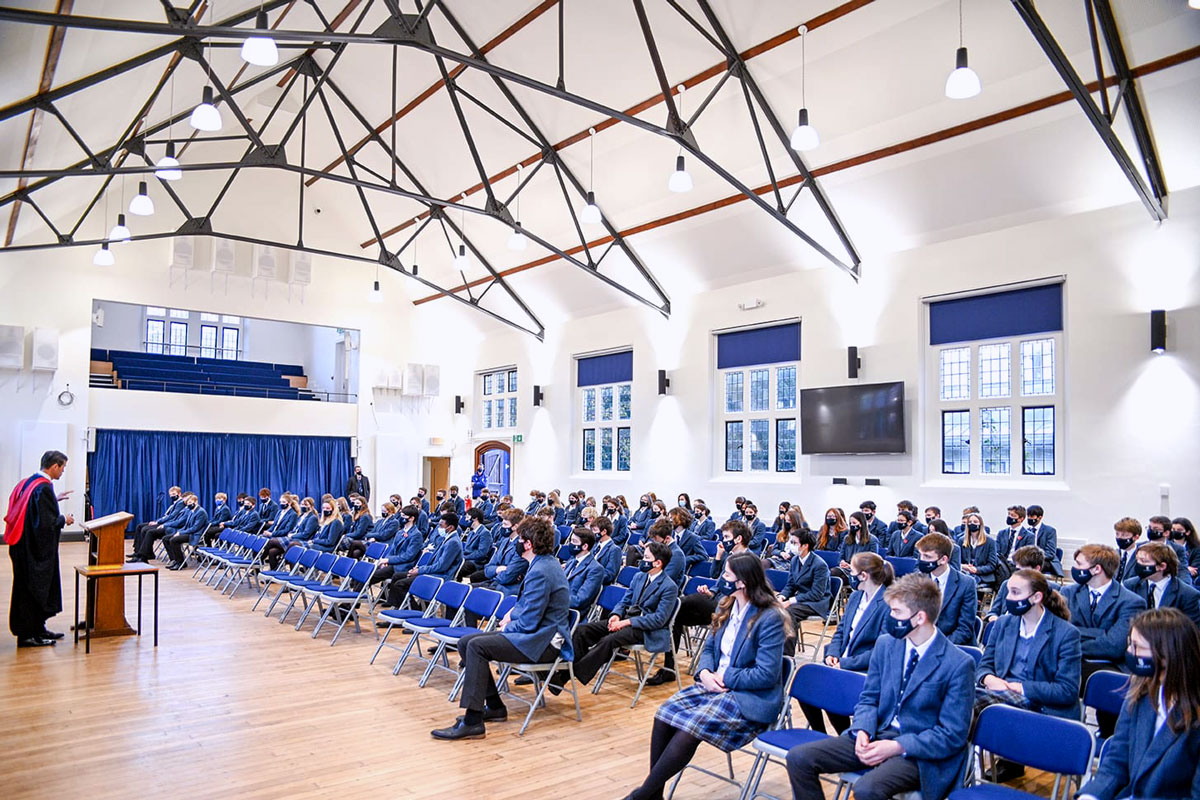 The new library is the latest in a series of projects and offers a modern, spacious teaching and learning facility The new library is a fantastic building for pupils, staff and the whole school community. It provides a wonderful study space as well as flexible spaces for activities and events. This will allow us to encourage even greater usage of our digital services and online resources. I am also delighted with the space for books. The area for fiction is welcoming for younger year groups. This is a brilliant investment in literacy, reading for enjoyment and academic success for our pupils. The library team and I are all looking forward to working with the school community in this great facility.